Congressional Republicans held an annual retreat to discuss their agenda for 2017 including a "Two Hundred Day" plan.   President Trump joined the retreat and encouraged an aggressive agenda on health care, tax reform and new trade deals. Speaker Ryan has commented that the "Two Hundred Day Plan" may eventually take the entire year to complete, although he plans to have the bulk of the work done before the August Congressional recess. He outlined a legislative schedule for the House for the "first 200 days" that includes repeal of the Affordable Care Act, a funding plan for increased border and national security, and a comprehensive tax reform plan by August.  Senate Majority Leader McConnell has said the Senate will not move as quickly, and Democratic support will be needed for most legislation. 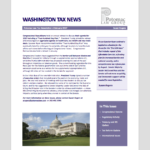