Unlike the September Congressional work period during which Congress faced a number of pressing deadlines, the October work period will have tax reform as its focus as Members of Congress work to achieve a key legislative success before the end of the year. In September, the President struck a deal with Congressional Democratic leaders which resulted in a short-term agreement on the debt limit and government funding which will expire December 8th. 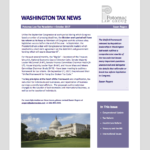