The announcement by Supreme Court Justice Kennedy that he will retire from the Court as of July 31st and the nomination of Brett Kavanaugh to the Court will have a significant impact on the agenda for Congress this fall leading up to the mid-term elections. Senate Majority Leader McConnell (R-KY) plans to have the Senate move quickly to consider the Kavanaugh nomination, resisting calls from Democrats to defer consideration of the nominee until after the fall elections as was done in 2016 when President Obama nominated Merrick Garland to the Court. 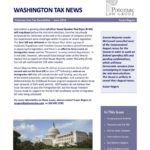