The President delivered his first State of the Union address on January 30th with comments focusing on immigration reform and infrastructure spending.  The Bipartisan Budget Act of 2018 ("Budget Act"), which was approved by Congress and signed into law by the President in early February, is a two-year budget agreement that sets defense and non-defense spending levels for two years, extends several expired temporary tax provisions ("extenders"), provides tax relief for victims of several 2017 natural disasters, and includes a handful of changes to the tax reform legislation enacted in late 2017, the Tax Cuts and Jobs Act ("TCJA"). 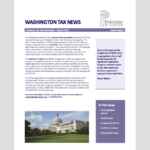