Congress faces a full legislative agenda for the spring including budget deadlines, health care reform, and tax reform.  The White House and House leaders have called for tax reform by the August recess, while the Senate appears to be on a slower pace for completion of a comprehensive tax package. President Trump addressed Congress on February 28th, presenting his budget and legislative priorities for this year, but provided no details.  The White House has stated publicly that they will release an outline of the President’s FY 2018 budget proposal by mid-March with a detailed budget to follow later this spring. 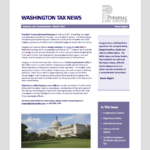