President-elect Trump will take office on January 20, 2017.  Congress convened on January 3, 2017.  Based on comments from the Republican leadership and President-elect Trump, it is expected that the Congressional agenda in the early months of 2017 will include repeal of the Affordable Care Act (ACA), tax reform, and changes to environmental regulations, as well as confirmation hearings for several nominees for key positions in the Trump Administration and consideration of several foreign policy issues. 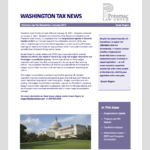