On November 8th, Donald Trump was elected the 45th president of the United States.  During the transition period until inauguration day on January 20, 2017, he is working to assemble a team of advisors and cabinet members.  The key appointee for the agenda on tax reform will be Trump’s pick for Treasury Secretary, Steve Mnuchin, a former Wall Street executive who served as the campaign finance manager. 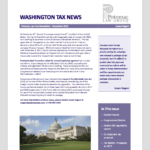