The House and Senate were scheduled to start their several week August recess on July 28th, but Senate Majority Leader McConnell (R-KY) announced that the Senate will extend the legislative work period into mid-August to allow time to focus on health care reform, nominations, and other legislative priorities, although the failure of the health care reform effort may take that issue off the agenda. The House Budget Committee approved a FY 2018 concurrent budget resolution, which summarizes broad spending cuts and revenue targets for the next fiscal year, but the full House did not vote on this prior to leaving for the August recess. 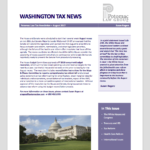