Prior to leaving for their Easter recess, Congressional leaders approved legislation called the Consolidated Appropriations Act, 2018, which is an omnibus spending package that funds the federal government for the remainder of FY 2018.  Passage of this bill, which was signed into law by the President on March 23rd, ends the series of Continuing Resolutions that have repeatedly been used by Congress since the start of FY 2018 to fund the government on a short-term basis and removes the threat of any additional government shutdowns during this fiscal year. 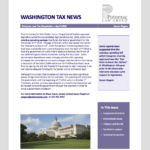